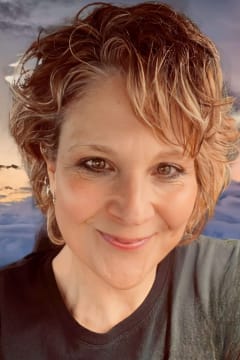 Stacie was always a loving, caring, nurturing, and sensitive person with a wacky sense of humor and an appreciation for the positives in her life.

From a very young age, Stacie was a fighter, having been born with a congenital heart defect. In addition, she grew up as the only girl in a Midland neighborhood full of Peterson, McKinney, Martin, Wallace, and Briskey boys and she quickly learned to hold her own! At age four she had her first heart surgery. Four more would follow.

Stacie lived her life without complaining. Many people didn't know about any health issues. In true Stacie style, at FPHS she joined the cross country {without Mom's knowledge} and nearly passed out by the time she reached Pipeline Road. The coach had to ferry her back to the school in a cart: then he read the whole medical form. Needless to say, that ended her running career.

After graduation she labored at commercial gill net fishing for three summers out of Yakutat, Alaska, hauling in those heavy nets by hand with her partner and sleeping in a canvas structure on the beach among the bears.

She ended her Alaska adventures in 1995 and worked at a succession of labor intensive jobs. She married and had her two children and for the next several years she provided daycare for a passel of neighborhood kids in Orting.

After moving to Graham in 2004, Stacie went to work for PC Parks, mostly at Spanaway and Lake Tapps. In 2006, she divorced and moved to Puyallup with her kids and began to work at the Puyallup School District until the fall of

2012 When she contracted a deadly infection from a virus that destroyed her heart. They didn't expect her to live, but there was a trial program with a lifesaving device at the University of WA that they decided to try. She was the only woman and the tenth person to be implanted with the SynCardia Total Artificial Heart and she lived with it for eight months, carrying the 16+ lb motor for the heart on her back. Always strong, stubborn, and determined. She received the first heart transplant in May 2013. Unable to go back to work, she turned to the gym and walking up to five miles a day to keep her new heart healthy. She always said it was a gift and she owed it to the 18 year old donor to take care of it.

In 2016 Stacie met her soulmate Jason Sagon. They were perfectly suited for each other and shared a good life together, just being happy and having fun. He appreciated her funny, witty, joy-filled personality and treated her like a queen. I am so thankful that despite all the roadblocks she encountered in life that God gave her Jason to end the emotional pain.

Stacie was an amazingly strong and resilient woman, and if she let you into her life it was because you were special to her. She loved life, laughter, cooking and scrubbing down anything that didn't move. She loved animals, flowers, vacuum lines on the rug, bugs and insects. In addition, she was kind to a fault, having been taken advantage of before meeting Jason, who just loved her for herself and her hippie spirit and treated her like the precious gift from God that she was.

Quotes from friends and relatives always contain love and respect. "You are wonder woman, the lady with determination and unbelievable strength, and tyhe fight we all wish we had in us. You will always be my hero and my 'sis."

"Always full of energy, spunk, and love. We will all miss that smile and the sparkle in your beautiful eyes."

"Through all of her trials she remained outwardly resilient, positive and strong. Her frank but loving personality will forever be missed by us all."

Stacie leaves the following loved ones to cherish her beloved memory:

And a large and loving group of nephews, nieces, aunts, uncles, cousins, and friends that became family.

Her wish for all of you would be to live, love and laugh because life's too short for anything else.