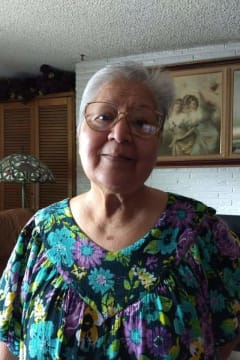 Rosemary Estrada Rogers passed away leaving behind her beloved life partner Danny Ray Rogers with whom she shared a home and family ties for the majority of her 83 years of life. Danny and Rosemary were once married to each other and have a son Daniel Joseph Rogers.
Nearly 25 years after they divorced, they reunited and have shared life together over 20 years at their home in Bonney Lake WA.

Rosemary is survived by Danny and her two children: Lissa Simona Estrada, and Daniel Joseph Rogers (Melissa) and their 3 children, Rosemary's Grandchildren Dustin, Nicholas, and Maya.

Rosemary is originally from Elk Grove California. She is the second born of 7 children of Joseph and Simona Estrada. She is proceeded in death by her parents, their firstborn daughter, and her brother Joseph Estrada (12/2012). She is survived by her sisters Lupita Mooney, Joan Phillips, Patricia Layaoen, her brother Thomas Estrada, and numerous nephews and nieces.

Rosemary graduated from Elk Grove Senior High School in 1958.
1960 Rosemary enlisted in the Navy, though being a shy young woman raised in a country lifestyle on a Hop Ranch, experiencing for the first-time a long distance from her family, she found the military lifestyle incompatible. She was discharged from the Navy basic training without going active duty.

Rosemary had a natural artistic talent that she claimed she got from her mother Simona who would quietly sketch drawings of ladies in beautiful hats and elegant poses. Rosemary enjoyed the outdoors and camping in her healthy adult years. She had a softness in her heart for the underdog and stray animal, you could say it was an empathic understanding as she kept her heaviest troubles silenced to herself. Rosemary was a giver, the things she gave were mere tokens of how very deeply she loves.

Rosemary was an employee of Boeing Aerospace Company in Seattle WA just over 20 years. She worked on the Stealth Bomber Program, as a Graphite Composite Specialist. As Team Leader to a crew of 10 she was loved and respected by her peers. In 1996 Rosemary won a battle against the odds of surviving Mesothelioma (Asbestos Lung Cancer). Upon surviving she then managed her healthcare to the best of her ability with diligence and determination to prolong her time with those of us that she is loved by and that she loved as much as her life itself.

We miss you.
Until we meet again, Via Con Dios Rosemary, Mama, Nana.