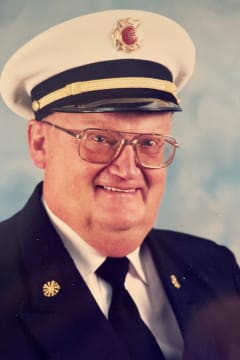 Merlin (Bud) L. Thorson passed away January 13, 2023 in Puyallup, WA surrounded by his family. He is preceded in death by his wife, Joan A. Thorson. Merlin (Bud) L. Thorson was born in Centerville, South Dakota, on July 16th, 1929, and moved to Seattle when he was seven. He served in the U.S. Air Force as an aircraft mechanic stationed in Germany, participating in the Berlin Airlift. He drove a truck in Seattle delivering to stores and restaurants, worked as a meat cutter for his brother’s grocery store in Angle Lake, WA, and was the first paid Fire Chief for Federal Way Fire Department which is now known as South King Fire & Rescue. He also enjoyed coaching baseball for his children’s teams.

During his tenure as a Fire Chief, he participated in implementing the South King County Medic One program that included working with the King County EMS to train firefighters to become defibrillator technicians; his department was the first in Washington State to reach this achievement. Chief Thorson also partnered with the U.S. Secret Service as the Emergency Services Coordinator for a U.S. Presidential visit to the area. He retired from the fire service in January 1990.

Following Bud’s retirement from the fire department, he enjoyed salmon fishing, serving as the “bait boy” on the Shenandoah, building furniture, and making charcuterie boards with resin.