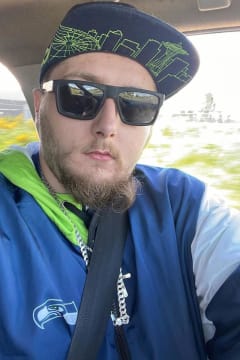 Kenny had a heart of gold, and was a beloved son, brother, cousin, uncle and grandson. Spending time with his family was never given a second thought, he was always right there alongside his loved ones. As a young boy Kenny was like a sponge and absorbed his kindness and good nature from his mother and grandma Char, and as he grew he became a great role model to his younger cousin, Macy. Kenny was a brave and kind soul who was always there for his family and close friends. To Kenny, gift giving came naturally, and he would lend a hand to help anyone at any time. Kenny believed in safety and acceptance, and was a natural guardian to his loved ones. When it came to his mom, sisters, and those he loved, he took great pride in teaching them how to defend themselves and provided many gifts to keep themselves safe.
From an early age Kenny enjoyed the outdoors and exploring; from camping, fishing, shooting, riding mini-bikes, quads, snowmobiles and swimming in the natural springs the PNW provided. Working out and keeping himself in shape was important to Kenny, and lifting weights an activity he always enjoyed doing. The Foothills Trail, which Kenny and his family referred to as the Orting trail was a great grounding space for Kenny. From a very early age Kenny enjoyed going to the park in Orting. Kenny’s mom began bringing him as a baby, with his older sisters to play at the playground and walk the trail. As Kenny grew he continued to spend time along the Orting trail, branching out and bringing nearly all of his family members and friends to enjoy the trail throughout the years. From walking, long boarding, and riding bikes, to swimming in the river and catching fish, Kenny enjoyed the time he spent there.
Kenny also loved listening to music, he often changed his sister, Heather’s mind on rap music and got her jamming out and listening with him. Two of Kenny’s favorite songs were Colt 45 by Afroman and Hit Em Up by Tupac.
Throughout Kenny’s life he worked many jobs. Kenny’s first job was at a catering company and as a young adult Kenny became a valuable asset to Tannahill Construction, where he worked alongside his dad on many different job sites.
Kenny had many interests but his greatest passion in life was rescuing animals who had either ran away or been abandoned. The first animal saved by Kenny was when he was a young boy. Sara was a pit bull-lab mix found along side the freeway without any tags, Kenny was with his mom and Sara jumped right into their car when they stopped to see if she was hurt. Kenny also rescued countless kittens from underneath a local gas station. One of Kenny’s most recent rescues was a large pit bull who Kenny named Guy. Guy came into Kenny’s life when his oldest sister took him to the humane society. The employees at the humane society tried to sway Kenny into selecting another dog, but Kenny knew that Guy was the companion he needed. Kenny was an amazing dog owner and trained Guy, with a lot of love and attention Guy became a loyal companion. Kenny’s enormous heart extended larger than his family and rescuing animals throughout his life shows the love and essence of Kenny’s Character.
Kenny is survived by his parents; sisters, Heather, Jennifer, and Christina; nephews, Caden and Carson; grandmother Colleen Hasfurther-Simmons; several aunts, uncles, and cousins; several great-aunts and great-uncles. Kenny was predeceased by his maternal grandmother, Charlotte Tannahill, paternal grandfather Kenneth Wayne Tannahill, paternal great-grandmothers Virginia Leonard and Nora Turner.
Services were held on Sunday October 2, 2022 at Voiles Funeral Chapel in Sumner. Followed by a Celebration of Life at the Orting City Park.
A memorial bench will be dedicated in Kenny’s name along the Foothills Trail in Orting, if you would like to contribute, please contact his immediate family or donate to Kenny Tannahill’s Go Fund Me.