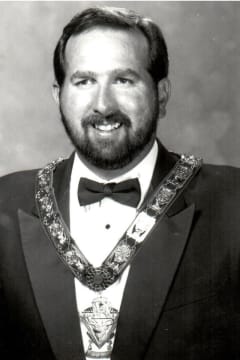 Joel, known as Jules to his family, grew up in Tacoma, Washington and attended Holy Rosary and Lincoln High School. After moving to Southern California in the late 80’s, he married the love of his life, Susan. They settled into life in the high desert, and Joel became a member of the Beaumont/Banning Elks Lodge 1839.
Over his 36-year membership, he made friends, cooked many a Sunday Breakfast, and eventually achieved the rank of Exalted Ruler. Additionally, he could also be found among friends at the Hemet Elks Lodge, where he was an associated member.

During his time in Hemet, California, locals got to meet “Sourdough Joel” and to this day, many still have fond memories of Joel’s sandwiches, infamous wall of hot sauces, and award-winning chili. Many weekends were spent cheering on his beloved Huskies, reading science fiction, perfecting his tan at the beach, cooking for his girls, riding his bike around the local reservoir, and sailing in San Diego.

Joel loved to travel, and his passports were full of stamps from the world over. Some of his fondest memories included cruising in the fjords of Scandinavia, island hopping with friends in the Virgin Islands, and salmon fishing in Alaska. Joel and Susan returned to Washington several years ago and have been living the retired life in Graham near friends and family where Joel was most likely known by all the baristas in the area during his early morning coffee runs.

Predeceased by his parents Stephen and Josephine White, Joel is survived by his loving wife of 35 years Susan White (Brearty), daughters Jody Leon and Paula White, their spouses Juan and Johnathan, and grandchildren Layla and Zachary. Jules is also remembered by his siblings Jorja, Jeffery, Johnathan, Joanne, and Joseph along with countless nieces, nephews, and cousins.